WX is a core WX Network ecosystem token that is essential for WX Network Liquidity Pools investment product. WX token has 8 decimals and is non-reissuable. The originally emitted (issued) 1000,000,000 WX tokens will be locked on the contract. However, only a part of the total emitted amount will be released into circulation (during 2628000 blocks or about 5 years) in small portions according to release rate while a part of the amount will be burned. The release rate is based on community voting, so the users can decide what amount of WX will be released into circulation and what amount will be burned.

There are many ways to use WX token in Liquidity Pools investment product and other places:

There are few ways to get WX token: 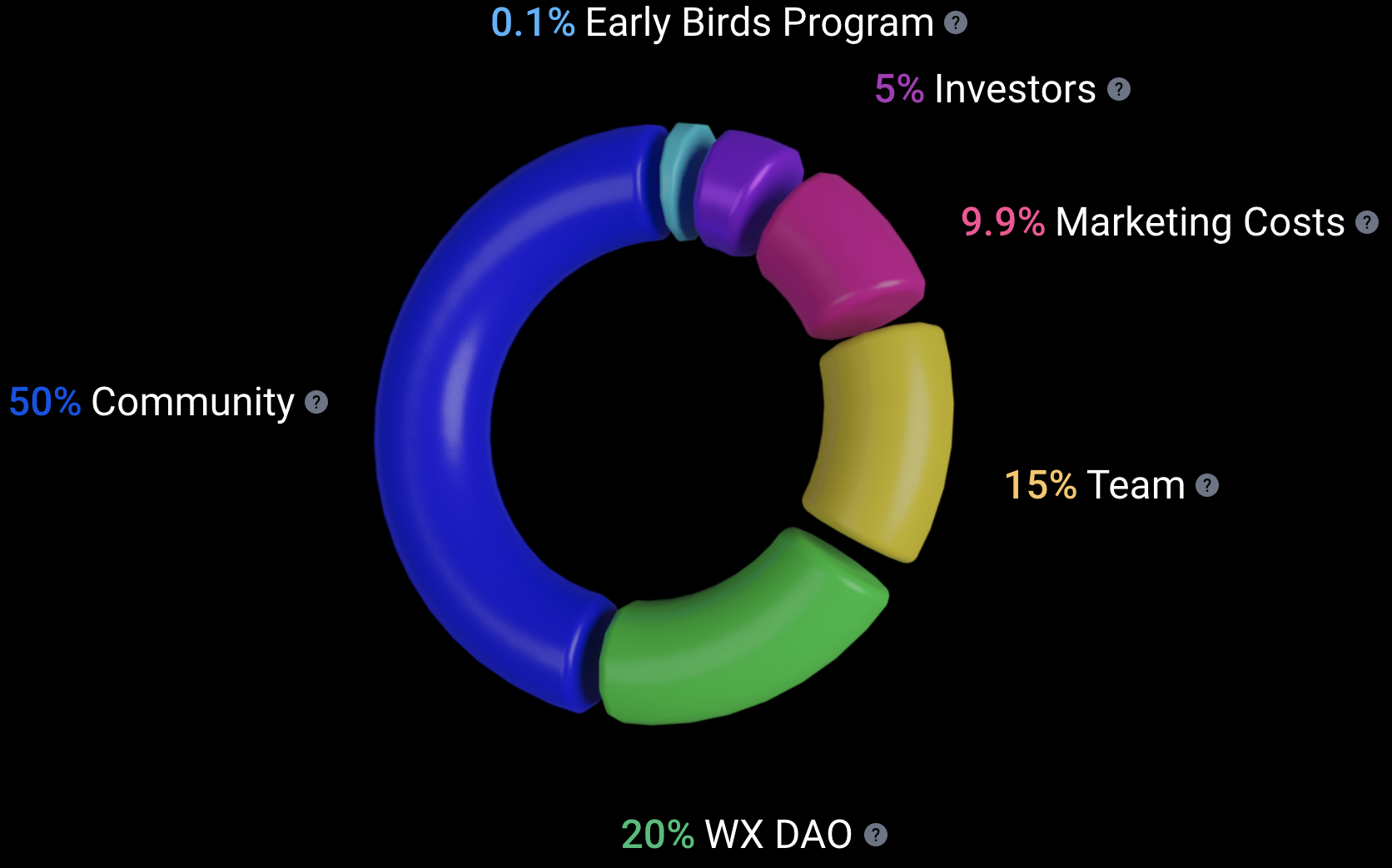 WX tokens will be distributed among several smart contracts in the following percentages:

WX liquidity pools is an investment product that allows users to receive passive income for investing tokens in the pools that provide liquidity for smoother spot trading on WX Network. The service employs smart contract (opens new window) technology to speed up the trading process by means of AMM (Automated Market Making). The invested tokens are used to stabilize the prices of the corresponding token pairs on WX Network. The AMM algorithm automatically fills traders' orders using pools' liquidity provided by users. AMM controls the proportion of tokens in each pool depending on the price change. The more liquidity is in the pool, the less the exchange load affects the prices. AMM algorithm makes trading profits and collects them in the pools. This increases the liquidity of the pools and provides passive income for investors.

The service is based on the Waves blockchain that provides high transaction speed and low network fees.

To become liquidity provider a user needs to invest (deposit) proportional amounts of 2 tokens, for example WAVES and XTN in WAVES/XTN liquidity pool. Also, it is possible to make a deposit with one of the two tokens of a pool.

A liquidity provider (holder of LP token) can withdraw the deposit at any time - in this case the LP token will be exchanged to the 2 original tokens at a new price depending on the current price of the LP token and the prices of the tokens in the pool.

Depositing and withdrawing is an atomic operation (with slippage*), meaning that it consists of only one transaction that either happens or it does not.

Slippage is an option with several presets (0.5%, 1% and 3% etc.). During deposit/withdrawal operation, the price of LP token may change significantly. If the price change exceeds the selected Slippage %, then the transaction will not happen and tokens will be returned. See example of slippage when entering a pool.

For example, you want to deposit tokens in WAVES/XTN pool that currently contains 200000 WAVES and 1000000 XTN. This means that the price of 1 WAVES is 5 XTN by the following formula: PRICE=(XTN amount in pool)/(WAVES amount in pool).

Important: Depositing tokens in a pool can be done only in the same proportion as the pool currently has.

For example, if you want to deposit 2000 WAVES, taking into consideration that 1 WAVES is priced 5 XTN, then you will also have to deposit 10000 XTN.

# Slippage When Entering a Liquidity Pool

Let's review the case of slippage when entering (depositing tokens to) a liquidity pool.

For example, the pool contains 200000 WAVES and 1000000 XTN and the price for 1 WAVES is 5 XTN. Let's imagine that someone placed trading order to exchange 10000 XTN to WAVES and the pool filled the order.

As you can see, after the exchange the price changed by 2.1% (by the formula: Percent=(Pricemax-Pricemin)/Pricemax*100).

Let's review the case of withdrawing tokens from a liquidity pool.

Then the 4000 LP tokens will be burned and what you get in WAVES is:

and what you get in XTN is:

# How the Tokens Deposited in a Pool are Used in Trading?

Tokens invested in the pools are used by automatic market making (AMM)trading algorithms that place orders in the corresponding trading pairs on WX Network. This way the pools provide liquidity for trading pairs and make trading profits.

The price spread of the orders is specified in a pool' config. Currently all pools use the following formulas:

The algorithm places buy and sell orders in a "ladder" manner, meaning that every next level (order) is placed as if the previous one is already filled (with all the consequential balance changes).

Trading profits made by means of the orders spread are accumulated in the pool which makes the price of the pool's LP token grow over time. This forms Base vAPY*

Base vAPY - the variable annual percentage yield based on today's trading activity. Profits made by AMM trades can be calculated by the formula:

A liquidity provider (holder of LP token) can stake LP tokens to receive regular rewards in WX token according to release rate. LP staking rewards in WX token will be accumulated on the contract and can be claimed by the user at any time. Staked LP tokens get locked (similar to XTN staking) and cannot be used in any other way until they are unstaked.

Release rate indicates the amount of WX released every time a new block is added in the Waves blockchain.

The difference between ReleaseRateMAX and ReleaseRate is burned by the smart contract. 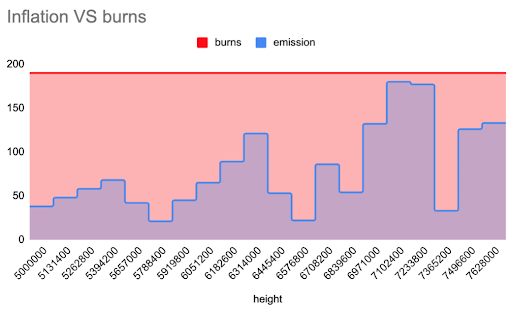 So the graph of WX release looks as follows: 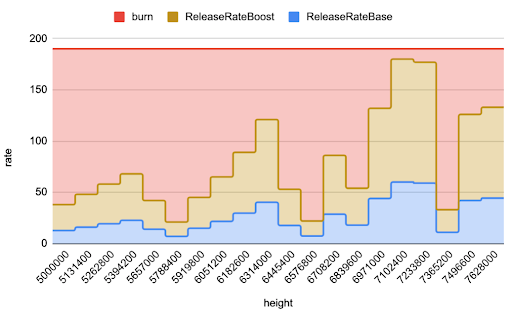 Please note that the ReleaseRateBoost is 100% utilized only if all liquidity providers apply maximum boosting. In reality this is not likely to happen, so the realistic release graph would look as follows: 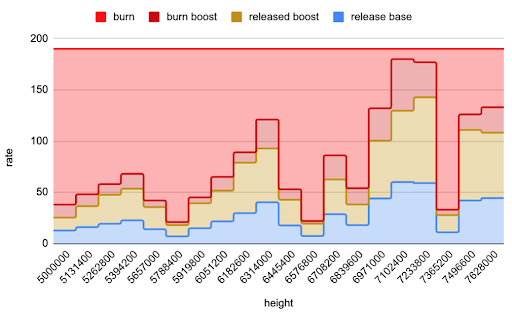 # WX Distribution to Pools and Users

WX rewards are distributed to liquidity pools based on their pool weights. For the first quarter of the year after launch of the liquidity pools every pool' weight W was constant. The sum of weights of all the existing pools equaled 1.

Now that the voting feature is implemented, users can change pool weights every 10080 blocks (every week) by voting with their gWX.

Every pool gets WX reward (poolReward) based on its share of Wi :

Every liquidity pool has its weight. Pool weight indicates a share of the pool in the WX tokens release. That share determines the amount of newly released WX token that the pool will get and then distribute among LP stakers. The bigger pool weight is, the more WX tokens the pool receives and the higher Reward tAPY* this pool has. Pool weight can be changed by voting or when new pools are launched.

Reward tAPY - the variable annual percentage yield that is based on the current price of the reward token (WX) and the reward rates.

gWX is the unit in which the boosting and the voting power is measured. Boosting is a mechanism that is activated automatically for liquidity providers who have gWX. gWX holders get their LP staking rewards boosted simultaneously in all the pools where they have staked their LP tokens. The amount of gWX for maximum boosting in a pool depends on the share of the staked LP token in that pool. The bigger is the user's share, the more gWX the user needs for max boosting. Max possible boost coefficient is x3.

A user can get gWX (boost) by staking WX token for a period from 2 weeks to 4 years. The more is the amount and the longer is the duration of WX token being locked, the more gWX the user receives in return.

The amount of gWX that a user gets at the start of WX locking period is calculated by the formula:

Important: gWX balance gradually decreases starting from the moment when WX token was locked until it reaches 0 at the end of the selected locking period.

A user can lock more WX to get more gWX even if the current lock isn't expired.

Read more about gWX and how the boosted WX rewards are calculated in WX_lightpaper.PDF (opens new window)

Until December 13 2022, all gWX holders (not only liquidity providers) were entitled to claim regular rewards in WX. The amount of rewards was based on the user's gWX share and the amount of fees (all the trading fees collected by WX Network during a period of time). The payout of the rewards took place every week.